The Internet is Down for a Day​ - Panic in the Disco

Marketing Executive at Xenia Tech – an offshoring development agency based in London, Da Nang and Ho Chi Minh City, Vietnam. We are experts in Web/App development. With an industry-standard outsourcing process, we have been making great products since 2017 for clients all over the globe.

Overnight, someone has spilled coffee on the internet box, and it is down globally for the day, what do you do?? One eye pops open, you’ve beaten your alarm for work, good start to the day.
Grabbing your phone you check your alerts for the usual email, Facebook request from the lassie from last night, news and invites to Farmville. But hold on, there is no internet connection. There are only 2 types of people in the world for dealing with this situation, either it’s back to sleep and let the universe sort out this disaster hoping it is just a blip in the matrix or you run to your internet router to turn it off and on again like a fireman running into a burning building to save a really cool dog.
Either way, the result is the same. The net is down and you’ve never felt so alone in your life.
This story follows 2 lads dealing with this loss in their daily life.

Billy (Bloke A) works in the service industry so he knows he knackered and needs to get up for work regardless if there was a nuclear attack never mind if you just cant play candy crush.

Sebastian (Bloke B) works high up in a tech company (E-Commerce). He has a big decision to make, to contact work and see if you are needed in the office today or not. He decides to do the honourable thing and email in, ‘email to outbox - no internet connection’, next up WhatsApp, Viber and Messenger, no Paul Daniels magic happening here. Finally, he bites the virtual bullet and uses his mobile phone as a phone and gets the word that the boss is already in so to appear pronto. Oh Joy. 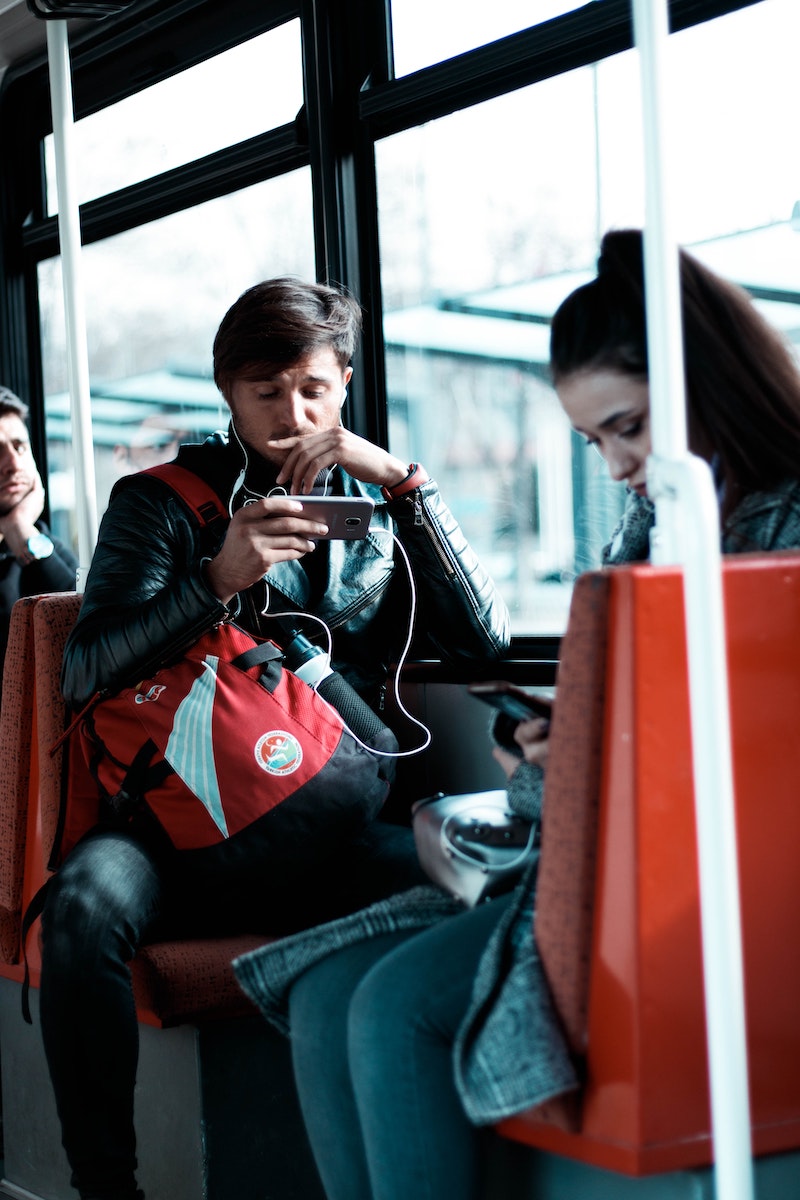 Billy, running late like a scallywag needs to check when his next train is available, he pulls his phone out, no connection. Even after waving it about for a while!!
“How did people live in the 80s?” he thinks to himself. He makes it to the station to be confronted with the Krypton factor challenge, i.e., a written train timetable. That idea is bailed on, and he just stands at his usual platform in hope. He whips his phone out to check if that friends request has come through, nothing. He checks the date to make sure it’s not April 1st. Oh well a quick hand of Poker while he waits……. Nope. Getting the hint yet Billy boy??

The train arrives, he climbs onboard and stares out the window hoping this cruel trick will be sorted by the time he alights.
1 more quick Facebook check, then put the phone away.

Sebastian jumps into his shiny Tesla enviromobile, as he pulls out of his driveway “Spotify, play North Atlantic Whale Songs” this is an attempt to realign his chakra in preparation for a testing day ahead.

Spotify does not connect, after the shock has worn off, Sebastian recalls a thing called radio 1, “better than nothing” he guesses. He was wrong.
How will people survive the day without the distractions of the internet and their daily updates on what a Kardashian feeds her parakeet for brunch.

Already mentally drained for the day, Billy arrives at work, another quick Facebook check. He tries to clock in with his thumb print to no avail. No connection, still. It must be the work WiFi. He restarts his phone with the faintest of hopes.

After a busy lunch service dominated by people asking for the WiFi password only to question why it’s not working and what he is going to do about it as clearly, he is the gatekeeper to the internet, he decides to knock up a sign on his phone to warn customers that they may have to talk to each other. Emailed to the office for printing, problem solved.

10 minutes go by then the Euro drops, no internet connection, out with the marker pen and turn the tv on to watch the updates from the city as the potential for rioting and looting by people bored and cant play games on their phones.

Sebastian drops his bag off in his office and makes a bee – line for the bosses’ office. As he scuttles through the bullpen full of techs in full panic mode turning everything on and off and banging the sides of computers. ‘How can we receive, prepare and send out orders to people if there are no new orders coming in?’
E-Commerce is fantastic and convenient, until it isn’t.

As he enters the Bosses office, he sees his is manically typing away on his laptop and phone at the same time “nothing will work” he proclaims.
‘No shit Sherlock’ Sebastian internalises as he retreats to his office to look busy.
His phone rings, it’s the boss, “why won’t my Zoom meeting work? Get it fixed!!”
“Look out of your office, the internet is down, no booking tee times online or ordering a Marks and Spencer delivery” remarks Seb.
“What channel is the London Stock Exchange Live on? Give Farquhar a call, we need his eyes on the LSE and the Hang Seng when it opens. The shareholders must be crapping themselves.”
“If this goes on too long there will be chaos on the streets. The price of pork bellies will go through the roof and my own shares in Haagen-dazs will melt away”

Back at work with Billy;

The afternoon lull has begun, then all of a sudden the POS decides to crap itself. Once again, another quick ‘turn off and on again’ to solve the problem is applied. This doesn’t help so he tries to contact the operating company, of course they are all automated. 10 minutes on hold until he speaks to someone who explains there is nothing they can do as all techs are out on calls and they cannot connect on TeamViewer because there is ………no internet connection. Oh well, just cash only tonight then.
“Sweet baby Carlos is there nothing we can do without the internet” he mumbles to himself.
“Don’t worry” a bar bum says, “The Grand National is coming on so we can have a wee flutter”. “I’ll check out the odds on my online Irish betting app”, “Bollocks!!!” he moans as his head bows in disappointment.“At least we have a backup generator if the was a power outage with all the panicking, so the beer coolers and fridges will still work”

The noise levels are on high compared with normal as everyone is on phones to vendors, other departments and customers which in the beginning is irritating to Sebastian, then he realises the amount of work that is usually quietly gotten on with to make his business run smoothly.

He goes to plug his mobile in for its daily afternoon charge then sees it has plenty battery left, due to not playing about on it and constantly checking his Dogecoin and bidding on rubbish from eBay.

His phone rings, it’s the boss again. “I can’t get access to the banking to have vendors and staff paid, what is one to do?”
“Leave it until tomorrow, everyone is in the same boat. Nothing can be done without online access unless you want to sign cheques in person at the bank.”
“You do need to be aware if we have a power outage it could take some time to get the servers up and running again. That will sting a good bit more, being off-line 2 days than just buying the generator I asked for, we could be doomed!”
Luckily the internal messaging service has still been working so not all has been lost for the day, just like back in the day.

Billy is on the countdown for the next shift coming in to relieve him and he can grab a beer and watch the football later. He checks his phone for the time, still no friend request, his heart sinks a little. I’ve been had (not literally of course).
His replacements arrive, he bowls out the door after informing them of the craic they will be having with no POS, clock in or Wi-Fi for the night then bowls out the door glad to be out of there.

Time to get an Uber to the pub to meet the lads. “FFS!!!” He manages to wave down a taxi eventually instead.
As he gets to the pub just in time for kick-off he notices a bit of a strange atmosphere and rumble in the crowd. He sits down with the lads “what’s going on?” he asks.
“They can’t get the football on cause they use the streaming apps as the satellite companies are extortionate.”
After consoling each other with countless other drinks, Billy jumps on the night bus home, wading between drunks and teenagers eh……being teenagers on dates, he throws his leftover kebab in the bin and heads to bed.
1 more quick Facebook check, nope, nuts. After painful day at work Sebastian is looking forward to dinner and glass of wine and a film for the night ready for what will ensue tomorrow.
Once home he puts the tv on and cracks open a beer. ‘What shall I order for dinner tonight?’ He thinks as he wrestles his phone out of his pocket. Nowt is the answer, well not via an app anyway. Finding an old menu he manages to call in his order.
While he waits, he figures he might as well do some swiping, ah not you too.

After his dinner and a few glasses he retires to his room and cracks his ‘personal’ laptop open. His eyes close and he lets out a large sigh as he sees the red ‘x’ in his Wi-Fi connections. Puncture repair kit on standby for the night.

Both go to sleep hoping for life to be less social again tomorrow and for that bloody friends request!!!!!! Do We Really Need Offices Anymore?
A very time appropriate question that I am sure most employers that use office space...
Read more → How To Protect Your Phone Privacy
Once only reality in science fiction literature, or in a James Bond movie, the smartphone...
Read more → Tomorrows World, Today (Or Maybe in a Decade or Two)
There have always been predictions of how the world will be in the next 10,...
Read more →